How to Detox Safely for more Energy!

Home News How to Detox Safely for more Energy! 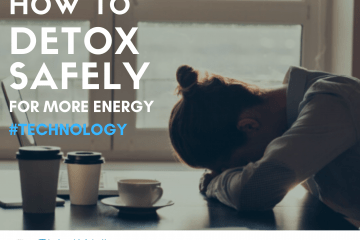 More than at any other time, we are being bombarded by an onslaught of toxins, most of which are cleverly hidden in every-day items, so we are unaware that our bodies are absorbing them. Because our intake of toxins is so great, a build-up is all too easy to achieve.

Toxins can be found pretty much everywhere in our environment and sources include:

So how does the body deal with the elimination of toxins and what causes a build-up to occur? In a normally functioning body, the lymphatic system transports waste from various parts of the body to the elimination organs such as the liver, spleen and kidneys which filters toxins and sends them to the colon to leave the body.

However, many people suffer from an unhealthy gut, whether they know it or not. This can be due to a variety of factors such as eating highly refined foods and emotional stress. This unhealthy state lets things such as bacteria, yeast, fungi and parasites thrive, which in turn disturb the function of the intestines. When the large intestine is not functioning, it congests the lymphatic system, forcing the waste to re-circulate within the body. When the liver is clogged, it allows toxins to go into the body, instead of filtering them out. This lack of adequate detoxification, leads the body to become a storehouse for toxins, which in turn, start to wreak havoc in the body.

The first signs of a toxic build up may take different forms, from a white coating on the tongue when you wake in the morning, to a feeling of bloating after eating and a desire to take a nap. General aches and pains are another sign, so too is a feeling of lethargy.

Left untreated, this initial accumulation of toxins may then cause serious health problems to occur such as; headaches, constipation, skin problems, hormone imbalances, inflammatory conditions, gastrointestinal disorders and decrease in cognitive function.

A build-up of toxins in connective tissue, muscle and nerve tissue can lead to blood disorders, organ and glandular dysfunction.

How Detoxification with Ozone can Help

When ozone is found in the atmosphere it causes smog and can be toxic but ozone produced for medical purposes has remarkable healing properties. Produced by passing oxygen through an electric coil, the oxygen (O2) gains an extra atom, making it ozone (O3).

All the cells in the body need oxygen to survive, whereas unhealthy cells such as viruses and bacteria need an absence of oxygen to thrive. When the body has been exposed to toxins over a long period of time and has lost the ability eliminate & detoxify them properly, they can block the cell’s ability to absorb oxygen and this is often at the root of many common illnesses.

A benefit of detoxification with Ozone Technology is that it can have a positive effect on almost all systems of the body including the immune, nervous, cardiovascular, gastrointestinal and many more.

Ozone therapy for detoxification is particularly effective in patients who have:

Get Superior Detoxification with Ozone Technology

Detoxification with ozone can be simple and non-invasive and can concentrate either on certain areas of the body or can stimulate elimination from the whole body.

Sitting in the HOCATT™ for 30 minutes, the patient’s head is exposed to the air while they relax and their body absorbs the Ozone steam. This full cleansing stimulates the elimination of toxins from all areas and organs of the body. By eliminating these toxins through sweat, the other excretory organs such as the liver, kidneys and intestine are bypassed. Therefore this method of detoxification with Ozone reduces the eliminatory stress of these organs during treatment.